Our new brethren in Fort Portal, Uganda.  Kaliba Samson is second fro left on the front row.  He's a small time farmer.  Standing behind the 76 year old woman is Bro. Jeff Cash.
I firmly believe that heaven is rejoicing!
-Sharon 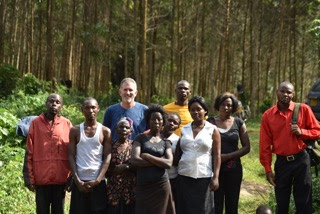 Dear Sharon, Phil & Glenn
Attached are photos for the baptism of Moliehi your student. Share this joy with all.
We thank the Lord for providing the way and the means.
Stay blessed.
Nhamo 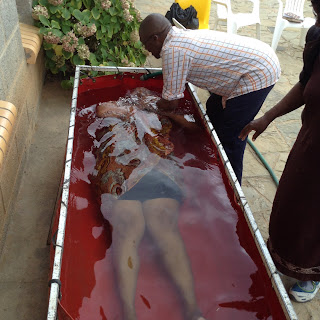 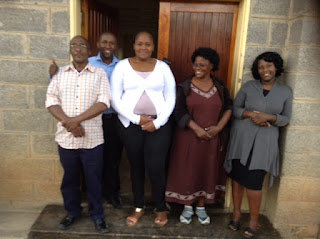 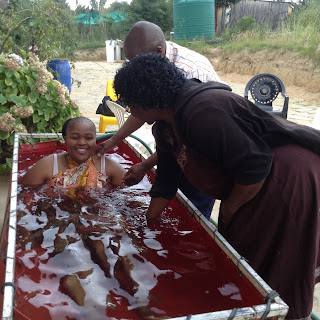 Informational Dinner to be held at Nashville Airport Marriot Oct. 13

If you'd like to learn more about World Bible School and how you might help in this tremendous ministry, let me encourage you to attend an informational meeting/ Dinner to be held at the Nashville Airport Marriot on Oct. 13.  An opportunity to support this great work will be available.

Already two are planning on attending.  If you would like to travel together, call the church office and we will arrange for a church van if needed.

Great New Opportunity in the public schools of Ghana!

Recently we received an invitation to teach 100 Ghana High School students using WBS curriculum over a period of 2 years at a cost of $650.  We've qualified that expense to be the same (or less) than if we taught 100 foreign students at random.

This is a great opportunity to take the gospel to Ghana's youth.  Biblical studies are required in Ghana's high schools, surprisingly!  If we don't do this, someone else will.  Local, Ghana, adult teachers will participate in the classroom overview of materials.  Very often our foreign students do not complete WBS's 7-part study series.  This effort ensures that they will as much as possible.  Single WBS postal mailings take up to 6 months from teacher to student and back again.  By using a scanning / download method between WBS, Ghana, and WSCC, we can bypass all postal delays.

I offer this information with the assurance that 100 students, handled quarterly (as the plan is set up) is both doable and desirable to spread the gospel with the number of workers we presently have.  A single person with focus-time can do this project if necessary.

Our Elders, at least week's meeting, agreed to meet the financial need in the expectations that God is certainly at work in this great ministry!  If you would like to volunteer to help in teaching with this increase in correspondence, please contact Andy Lyon or Sharon Walker.

Praise God that so much is being done for the Kingdom through these efforts.
Posted by Jim Black at 12:00 PM No comments:

I wanted to share this encouraging message from student in Kenya.  Lucy is married, age 52 and she's been baptized by immersion.  We began studying June 4, 2015.
WBS lessons give background, details and perspective to scriptures that bring clarity and grow faith.  Please pray for Lucy that her pursuit of understanding will continue.
Are we not blessed to be a tool in the Lord's hands to share His word!
Love you all,
Sharon
Lucy Njoroge
Aug 04, 2015
Very true ShaRon,
I have reading the Bible but this is the time am truly understanding it. We go to Church, listen to the g word, but we have no reference of the author. There's a very big difference between reading and having a nice insight of why and what is its purpose?

Visit with sister Naomi and her family 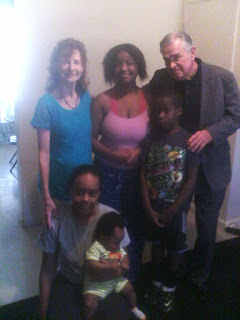 Just wanted to share a bit of our joy in visiting Naomi and the Thomasville congregation:

I don't think the trip could have gone better!

Map-quest driving directions were right-on!  We made no 'U-turns'.  At the last minute we were unable to stay with the elder and his wife due to their neighbor's emergent need to use the little cottage on the elder's property.  We found a deal at Days Inn, with breakfast.  Scenery was beautiful.  We were wowed by so many pecan, magnolia, peach and pine trees, Spanish Moss, peanut farms, and level land.

We left at 6:30 a.m. Saturday and arrived at 2:15 p.m.  We unloaded at the motel and went to find the meeting house.  It was 2.3 miles from the motel.  The preacher, Rick Kenyon, and another brother and sister, Wilson, were at the building preparing for Sunday.  Sunday was the first day of a 3 day gospel meeting.  We loved the congregation (which Naomi calls 'her congregation').  They number between 55 and 65.  Both elders led the service and congregation throughout the day.

They have a precious young preacher with wife and baby son; also a new outreach / home Bible study  young couple.  I asked them to teach Naomi further.  Recently the congregation purchased the Jewel Miller video series that accompany the 5-part study booklet that I've continued using with Naomi since she completed all WBS lessons.  Naomi's daughter, Akia, age 15, completed the WBS Children's series last week.  She's the first 'child' to do so.  I have 2 other students working towards their certificates and 2 more who stopped 2/3 of the way through.  I actually think the children's series is harder to follow than the adults' WBS.

We enjoyed testimonials of individuals at the luncheon that helped to encourage Naomi not to give up on her young son, Tyrice, who was baptized in February.  Tyrice told Naomi that he wanted to be a better person and enjoy the blessings of salvation; obviously he doesn't understand his need for the congregation or the congregation's need for him and his God-given talents and faith.  Naomi is hurting badly over this situation.  Please pray for her.  She's the only spiritual leader among 7 children, 5 of her own and 2 grandchildren. (Brittany age 20; Tyrice age 17; Akia age 15; Jaydin age 9; Yasmin age 8; TS age 1 1/2; and TJ age 4 mos.  I hope to help Brittany turn her life around and not duplicate her mother's situation at the age of 38 (Naomi's age).

I've never heard more or better singing than Sunday's.  Even the babies and young children were to be heard in every song.  The elder/song-leader, Bro. Garland Brasford, is without question the voice I've never heard.  He'd win any TV competition in voice.  His age is 70ish but I cannot describe his voice or the quality of it.

Sister Laura, who's volunteered to be Naomi's transportation (Naomi has no car) is from Florence, AL.  As it turns out her mother and sisters worship at Sherrod Avenue in Florence where our dear friend and fellow-companion in India Missions oversees that work.  We just looked at each other and said, 'small world'.  She has a precious heart to help Naomi.

Various ones sent extra food from the luncheon home with Naomi.  The ladies helped Naomi's daughter, Brittany, with baby clothes when the baby was born.  Recently Naomi was blessed to move into the best section of the housing project (duplex housing facing 2 church buildings and an open field with no neighbors to speak of); plus it was an improvement from 3 bedrooms to 4.  Her apartment was bare except for essential needs but it was clean, odorless, and a very pleasing place to live.  The congregation helped Naomi move and they got mattresses up off the floor in bedrooms.  Naomi is checking into taking her GED.  I'm going to be on the look out for GED prep materials to either send her or the money to purchase such.

The Thomasville congregation's gospel series is on 'advancing the home' that advances the family of God.  It was such a good and practical first lesson, yesterday, delivered by their preacher, Rick Kenyon.  The Sunday evening lesson was to be taught by the new personal work director.  Near-by preachers will preach Monday - Tuesday.

We had no car trouble though we had a back, low tire as we were leaving.  Don pumped it up and brought his little device with us in case it went down on the trip but there was no further concern.  My brother said he could see us going down the road in a white cloud of protection.  He was so right.  When we got home we dropped our heads in prayer of thanksgiving for having experienced a bit of heaven on earth and such a care-free trip.

There are 5 congregations in Thomasville, a city of apx. 18,500 population.  Three congregations are predominantly white and 2 are black.  They sound much like our own little Fayetteville in that the Thomasville leadership / preachers were hoping to meet with all the other area preachers/ leaders and see if they were all 'in fellowship'.  Thomasville is an inter-racial, integrated congregation though the percentages are probably 80/20, wh/bl.  Their facility had the feeling of a 'home', modest, well done, and so pleasingly, practical.  The grounds are perfectly level, 5 acres with fenced in, shaded play-ground for children, basket-ball goal on concrete, ample baseball/basketball/soccer grounds or room to expand the facility in time to come.  I forgot to mention that they are beginning their VBS today.

I think the trip did Don as much good as it did me and I think Naomi was blessed.  She called me 3 times on the drive home to make certain we weren't caught in any of the heavy rains coming our way.  Don stayed about 1/2 mile ahead of blinding rain that only caught up with us once, in So. AL, for about 10 minutes.  The rest of the drive, going and coming, was smooth sailing.  We did get stopped in a 30-45 minutes traffic jam due to work on I-65 near the Decatur / Huntsville exit, but other than that, 'no sweat'.

I can't tell you how many times we thought of all our family at Washington Street.  Don made the observation that you can drive miles from home but when you meet Christians you're back at home.  That's how we felt all along the way.

There are no words to thank all who make the WBS work possible and expand the Kingdom borders from points here in the USA and around the world.  But I'll say it again, "Thank You."

Sharon
Posted by Jim Black at 10:00 AM No comments: 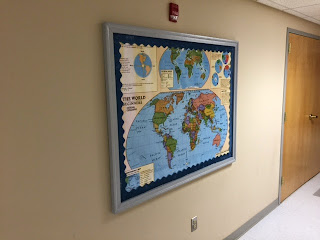 It's been an exciting new year for the World Bible School Outreach program at Washington Street Church of Christ.  Not only have we reached around the globe and touched lives for Christ, but we have made great strives here at home.
As of today, the 25th of January, we have seven, YES I said seven individuals who have chosen to become a part of this ministry outreach program.  We would like to especially like to welcome our newest teacher, Rebecca who has just joined up and wishes to help forward the teachings and word of God and Christ to the WORLD!
All said, the WBS program has seven teachers and 282 students of which 109 are in the United States of America!  We are truly blessed in how the program is growing and we look forward to an exciting new year and unlimited potential in reaching lost souls in the name of Christ!  Please continue to offer prayer that God's will be done in all aspects of this work.
On another note, we at WBS would like to that Grant with facilities maintenance for taking the time to build and hang our new bulletin board outside of the room.  We look forward to having Robert add some lettering and flags to the board to enhance awareness of the program.  We are truly blessed to have many capable and talented individuals who are willing to donate their time and skills to the program.
Please continue to pray for growth and success in sharing God's Word and we Praise HIM that enables all of our works.
"Go into all the world and preach the Gospel, every one of you..."
Andrew Lyon
Deacon WBS Washington Street Church of Christ
January 25, 2014
Posted by Jim Black at 4:14 PM No comments: